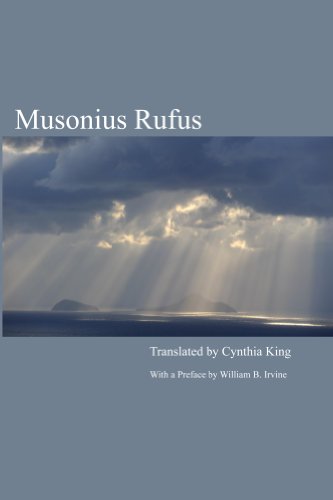 Musonius Rufus (c. AD 30–100) was one of the four great Roman Stoic philosophers, the other three being Seneca, Marcus Aurelius, and Musonius’ pupil Epictetus. During his life, Musonius’ Stoicism was put to the test, most notably during an exile to Gyaros, a barren island in the Aegean Sea.

Because Stoicism was, for Musonius, not merely a philosophy but a prescription for daily living, he has been called “the Roman Socrates.” MUSONIUS RUFUS: LECTURES AND SAYINGS will therefore be welcomed by those who seek insight into the practice of Stoicism.

In this volume, readers will find Cynthia King’s translation of Musonius’ lectures, as recorded by his pupil Lucius; the sayings attributed to Musonius by ancient writers; an exchange of letters between Musonius and Apollonius of Tyana; and a letter from Musonius to Pankratides.